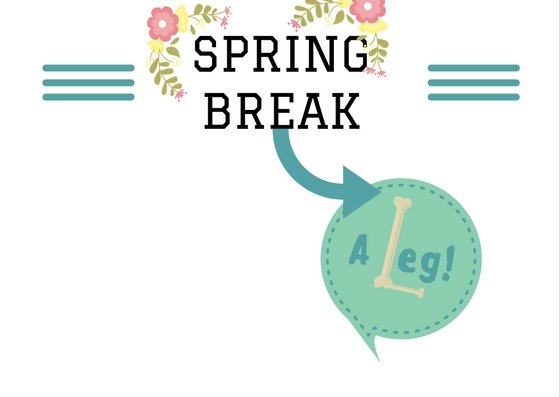 I look down at my right foot with a grimace, my expression falling as my eyes land on the humongous white cast around it.

I can’t believe I broke my frickin’ leg.

While it’s not the first time this has happened to me—and something tells me it sure as hell won’t be the last—only my unique kind of shitty luck would have this happen now of all times.

Spring Break officially began an hour ago, and instead of loading my trunk with my duffel bag, filling up my tank, and buckling up to drive down to South Padre with my roommates to have the time of our lives like we’ve been planning to since practically the beginning of the school year, I’m by myself, backstage in the Theater department’s dressing room, sulking and wallowing in self-pity and the incessant pain in my covered ankle as everyone else rushes to leave campus.

For goodness sake, I’d even made a whole five hour long Spring Break playlist on my iPod weeks ago in anticipation for the drive!

I guess it doesn’t matter anymore. No matter how pissed I am, the drive to Padre isn’t happening, I’m not having a Spring Break, and I have no one to blame but myself.

I flinch as I try to take a step, holding on to a nearby prop for support.

The last time I had seen my ankle, it was three times its normal size and still growing, all swollen and angry-looking; no doubt angry at me for being careless and spraining the hell out of it.

If it could speak, I have no doubt in my mind that it would most likely say something along the lines of “Serves you right! That’s what you get for being such an irredeemable klutz, you bitch!”

I sigh as the memory of my highly unforeseen—and utterly embarrassing—accident during last night’s performance replays in my head for the millionth time today.

I had all happened so quickly. The play had just ended, and thundering claps and enthusiastic whistles burst through the auditorium as the audience gave a standing ovation.

Everyone on stage, including myself, gave the customary group bow, and began walking off stage and disappearing behind the curtains. But then, in the usual excitement I get from performing live coupled with my elation from the crowd’s emphatic praise, my mind was on nothing more than the moment at hand, and as such, I wasn’t paying attention to where I was walking. Before I knew it, I’d already missed a step, and in no time at all, came tumbling down like Humpty Dumpty in front of over two thousand people.

In a split second, every performer’s worst nightmare had become my reality.