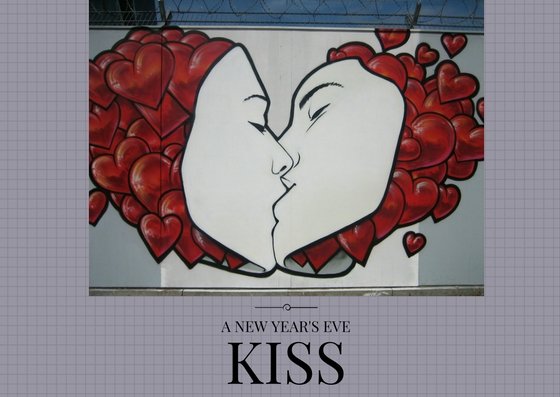 My ears are ringing; not because of the loud cheers of a million voices around me, or the band playing in the distance, or even the whistling and cracking sounds of launching fireworks in the sky, but because of something else; because of someone else.

My brain mildly registers that there is a pair of lips on mine, that someone is kissing me, but the rest of my body is lost in numerous sensations that I can’t even really focus long enough to put names to.

Time seems to slow all of a sudden, and then it comes to a complete standstill all together as the man moves further in on me, pressing his body into mine and deepening the kiss.

His tongue plunges into my mouth, and it’s so hot and wet and firm as it pushes urgently against mine. It should startle me but it doesn’t, and I take it instinctively. Without even thinking about it, I readily accept him, tasting all of him as if I’m in a crazed trance, my lips tugging firmly on his velvety flesh.

I feel his hands on my back, pressing me against him and making me feel the hardness of his body beneath his thick wool sweater. He feels absolutely incredible, and I can’t stop the moan that escapes my lips as my nipples start to harden beneath my many layers of clothes. He swallows the whimper, taking it in just as greedily and urgently as the rest of my mouth.

I feel so lightheaded it’s ridiculous, like I’m floating in an unknown stratosphere with no hope of ever coming back down. My heart is thumping frantically, beating almost violently against the confines of my chest like a twenty-tonne sledgehammer.

Right now, nothing matters except for the feel of his soft lips on mine, and in this moment, nothing is more important than the way he possesses me with his tongue, holding me captive and rendering me powerless as my own lust grows to match his.

Somehow, the shortest of seconds stretch into an unforgettable eternity as a mere kiss from a total stranger makes me forget absolutely everything; where I am, what I was doing, and by God, even my own name.

I get so lost in the moment, so consumed by this stranger’s kiss that it takes a while for me to register that someone’s been calling my name.

“Peggy!” All of a sudden, I can hear Mel calling out from somewhere behind me. Her voice is faint and distant, but it’s more than enough to startle me and bring me all the way back to the present, and more importantly, back to my senses.

Immediately, the spell is broken and the logical part of my brain forces back to the present, back to the reality that this man had unwittingly swept me away from for what had to be the most mind-blowing ten seconds of my life.

Abruptly, I jerk away from the stranger, pushing frantically against his chest in my new state of panic.

A strange feeling that I can’t really describe, but feels like something akin to disappointment, quickly follows and settles in my belly as I put more distance between the man and myself.

“Peggy, over here!” Mel yells again, and this time, I can hear her clearly. I turn to see her and Derek just a few feet away, still advancing toward me with their hands raised for me to see as they try to signal their presence within the crowd.

I turn back to the stranger, wondering with a sense of dread how I’m going to explain him to Mel and Derek, especially when I can’t even explain what just transpired between us to myself, but I come face to face with nothing.

Immediately, my eyes dart around in slight panic at his absence, my head jerking left and right in search of him, but I come up with nothing.